For the past month and a half I have been absent from my life. I dropped everything, my career and my life, said goodbye to friends and family (most difficult of all, my two year old son) and moved to Michigan to edit on a film. I would do this for only one film, by only one filmmaker: “Capitalism: A Love Story” by Michael Moore. 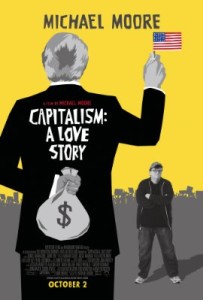 Normally I wouldn’t, but I’m going to allow myself the luxury of writing what amounts to a review of a film I worked on as a way of explaining why I would give up so much for it (and apologizing to those I left behind).

When Michael Moore showed me the footage, I watched it with mouth agape. I knew instantly that this was his most important film… his most dangerous film.

Already, the film is having its effect: at the world premiere at the Venice Film Festival, it played to spontaneous applause throughout and ended to an 8 minute standing ovation! “Unprecedented” is the word on everyone’s lips. The reviews are astounding.

People will tell you that this is his film about the economy. No. This film is a revolution. This film is about our lives and identities as Americans and as citizens in the world. This is “Fight Club” and “The Matrix” in documentary form: we walk around as blind slaves and this is the red pill.

This photo says it all to me… 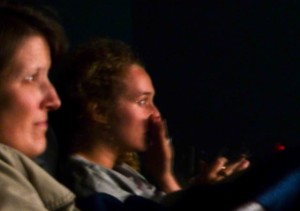 It is the Line Producer and the Post Supervisor at the final color check screening. When I raised the camera, they were laughing, by the time I took the photo, these were their expressions. They have seen the film hundreds of times, and yet, it’s difficult not to get swept up in the emotion of the film. I have seen it a hundred more times, and there are jokes that still catch me by surprise, personal stories that still choke me up.

All I can say is that it will be intense. One person in a test screening said “I feel like throwing up” —at a documentary about the economy! You will leave feeling angry, and uplifted and, most importantly, empowered.

Because the big secret is that this revolution is already taking place. It’s already in everyone’s heart.

My hope is that this film will set people’s minds ablaze. That everyone will leave the theater and we’ll write our own ending. We don’t have the option not to. Something’s gotta give.

And maybe you won’t agree with Mike’s conclusions. Maybe you’ll have better ideas. Or maybe you think everything should stay the same. That’s fine. At least we need to have this discussion.

I write this as I fly to the Toronto Film Festival for the North American premiere of the film, and the words of Leah —one of the characters in the film— keeps ringing in my head…

“if you’ve been told your whole life that things are they way other people tell you they are. To be able to think, well no, I can make it different is… a big deal.”